Major Braintree development given the go ahead 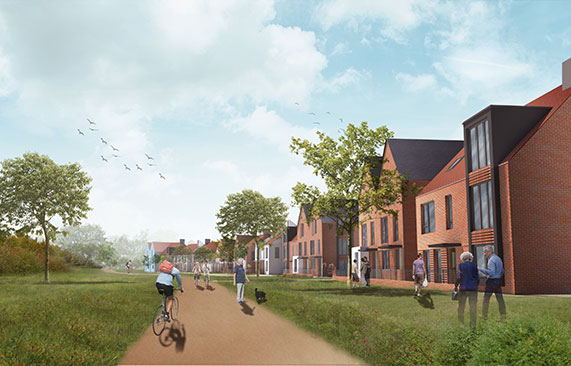 Work to create 1,000 homes, a new primary school, community facilities and improve a local road network in Essex has been given the go-ahead by Braintree District Council.
‍
L&Q Estates – previously known as Gallagher Estates until they were acquired by one of the UK’s leading housing associations and developers L&Q in 2017 – received a resolution to grant outline planning permission by Braintree Council for the major scheme on land to the east of Broad Road in Braintree.

Work on the first new properties, which will include 30 per cent affordable and shared ownership homes, are expected to commence in 2021.

The scheme will also involve the provision of land to build a new primary school on the site along with early years and childcare facilities, the creation of public open spaces, landscaping and a local centre with shops, restaurants, cafes and a GPs surgery.

The road infrastructure will be improved by creating two access points from the A131 Broad Road as well as completing the upgrade schemes to Marks Farm and the A131/Broad Road roundabouts, upgrading existing bus stops and improving public rights of way and making a financial contribution towards improving Braintree town centre’s bus station.

A network of cycling and pedestrian facilities will be introduced and there will be improvements made to the river walk to the south of the site.

There will be land provided for employment use and financial contributions by L&Q Estates towards a local community project and indoor sport provision.

There will also be allotments, equipped play areas, public art and recycling facilities as part of the new community which will be created.

Richard Edwards, group planning director at Warwick-based L&Q Estates, said the site had been included as part of the emerging Braintree Local Plan.

“This site in Braintree will deliver a wide package of measures as part of the section 106 agreement.

“As well as housing, the development will provide a new school and a whole raft of facilities that will benefit the wider community as well as create jobs from the employment units that will be built.”