Plans for new school and homes in Leicester 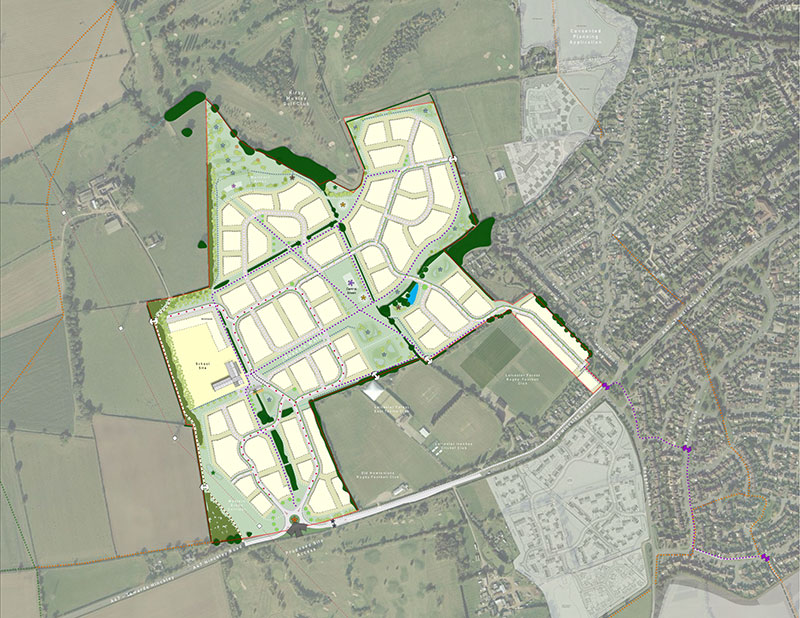 A revised application has now been submitted that will deliver a new community containing a primary school and up to 885 new homes if plans are approved in Blaby on a site allocated by the Council for development.

One of the largest strategic land developers in the UK, L&Q Estates, has submitted a revised outline planning application to Blaby District Council for Hastings Fields at Leicester Forest East on land north of the A47 Hinckley Road in Kirby Muxloe.

The amended application involves demolishing existing buildings and building 885 homes which will include a combination of one, two, three and four-bedroom properties with 25 per cent being affordable houses for local people in housing need.

The main access from Hinckley Road will be by way of a new roundabout junction which will incorporate a loop road to facilitate a diverted or new bus route within the site.

The addition of the new land would create a second point of access for pedestrians and cyclists on to Hinckley Road.

Richard Edwards, group planning director at L&Q Estates whose headquarters are in Warwick, said a revised application had been submitted to provide a more comprehensive and cohesive development that has walking and cycling at its heart.

He said: “We have brought in Dr Stefan Kruczkowski, a nationally recognised urban design practitioner, into the design team to help shape the development into a truly sustainable 21st century development.

“The final detailed design will be governed by a comprehensive design code to ensure the key design and movement aspects are delivered as set out in the application.

“We have submitted the new plans which further improve the design of the scheme on the site which was allocated for housing as part of Blaby’s Local Plan.

“A one-form entry primary school is planned along with improving walking and cycling connectivity which is really important in creating an integrated sustainable community.”

The application is expected to be discussed by Blaby District Council Planning Committee early in 2022.